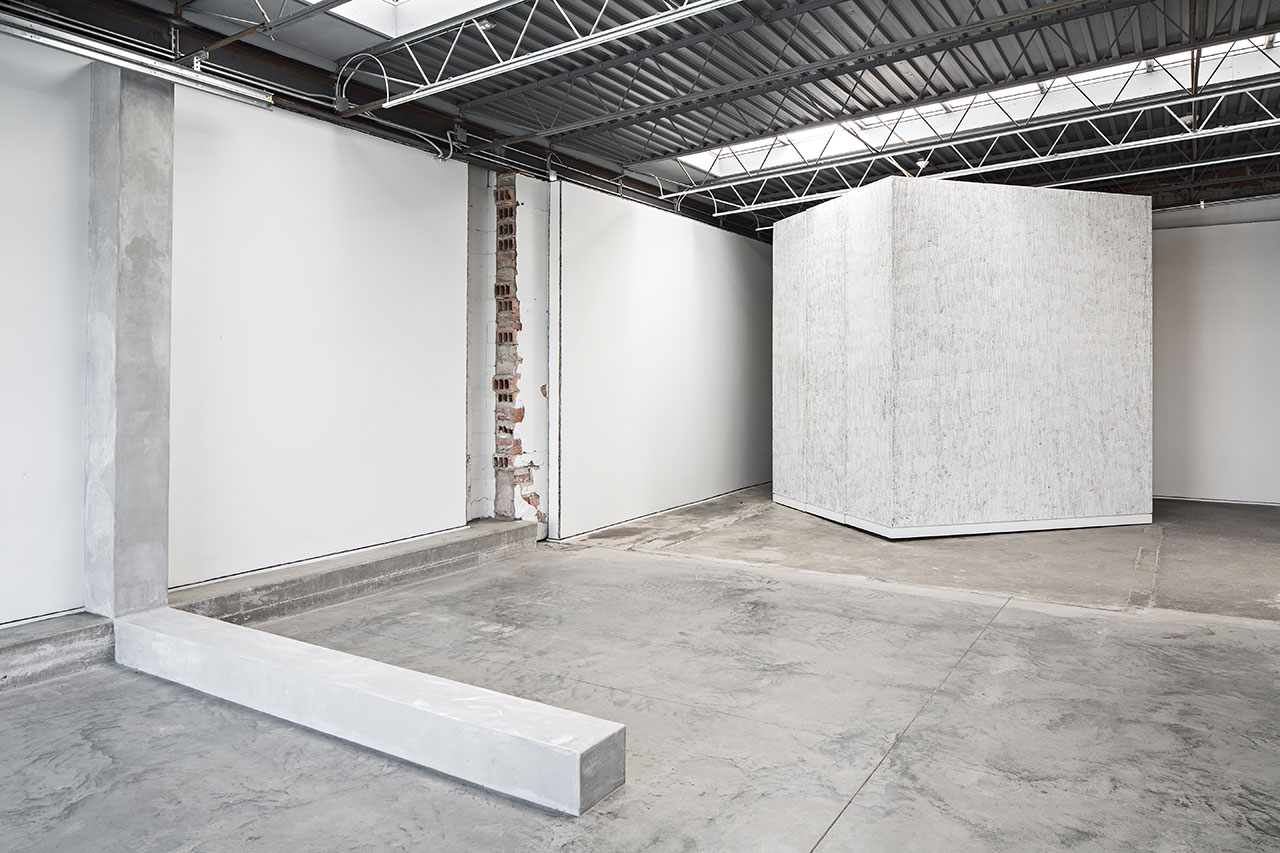 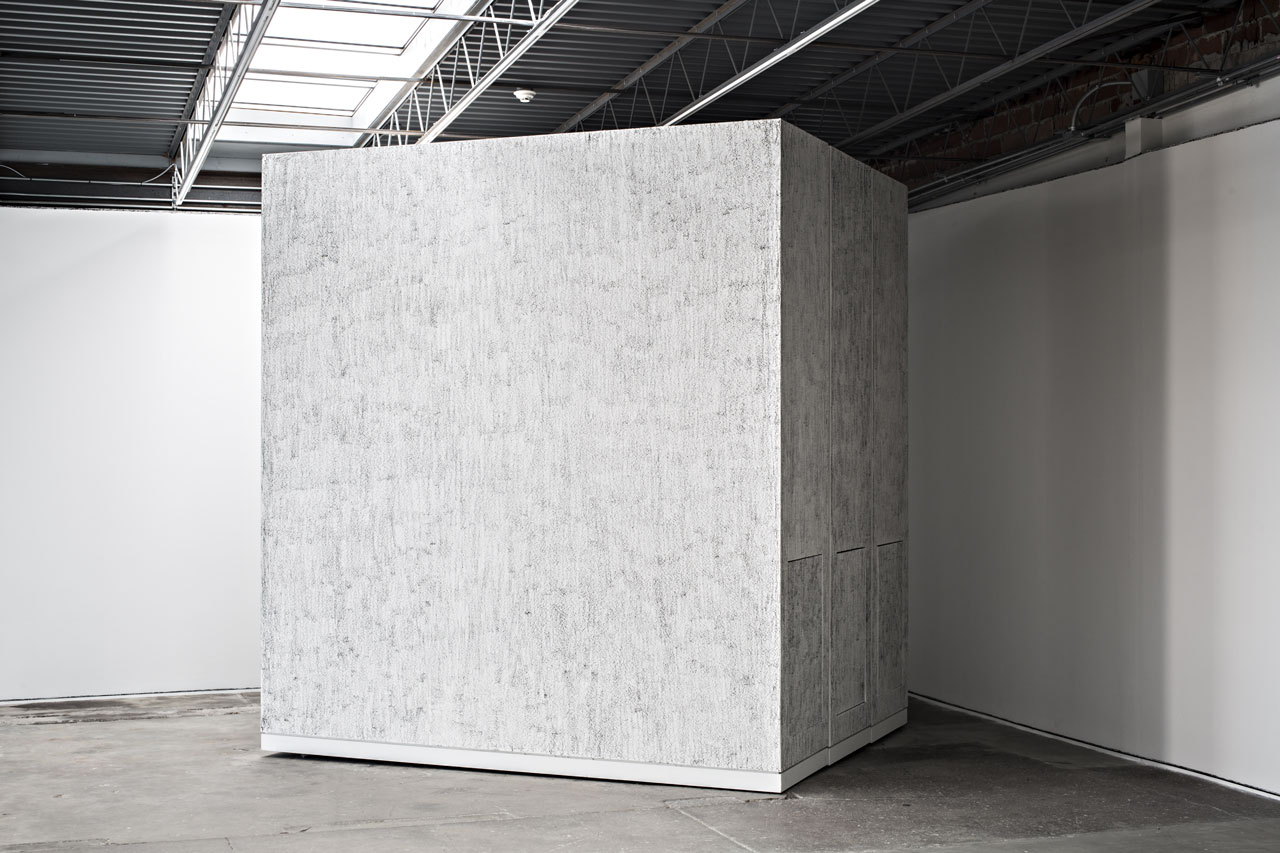 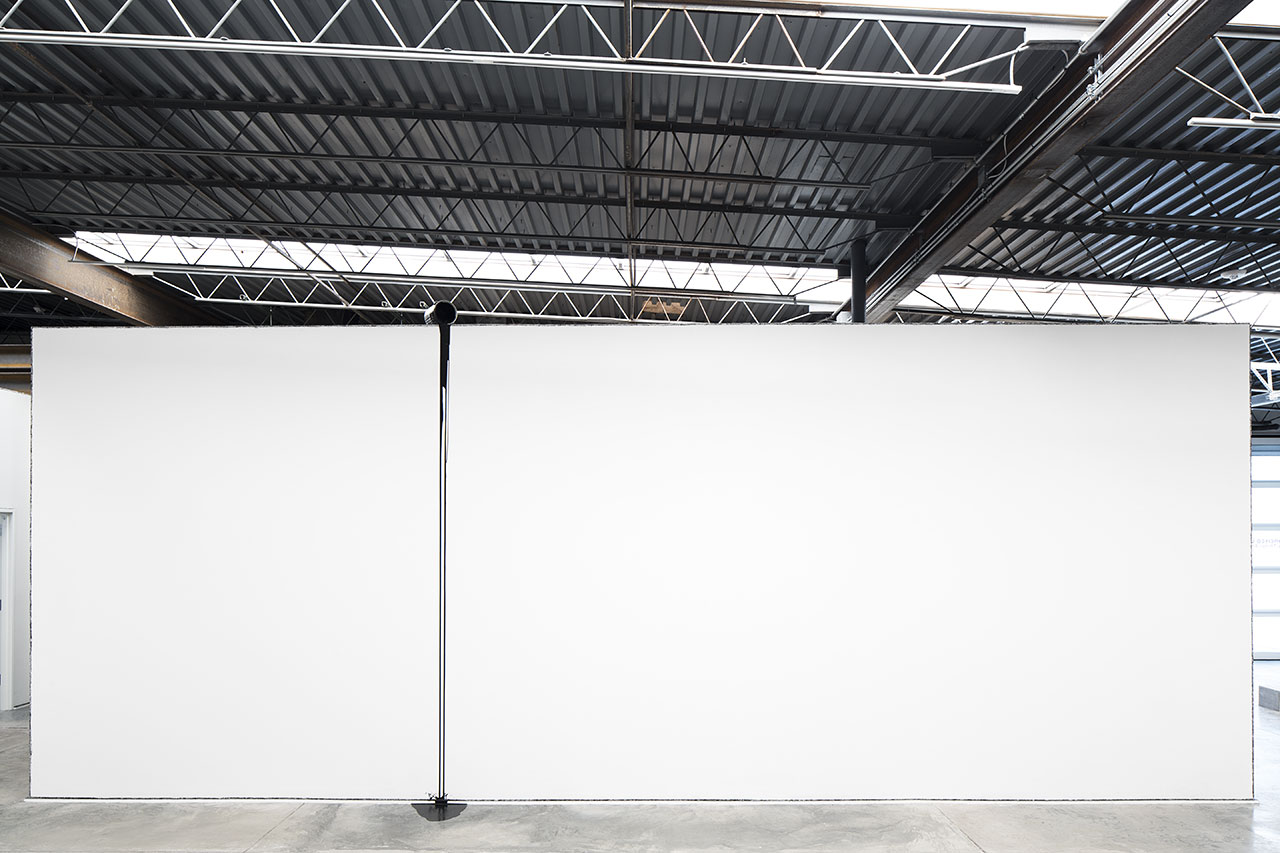 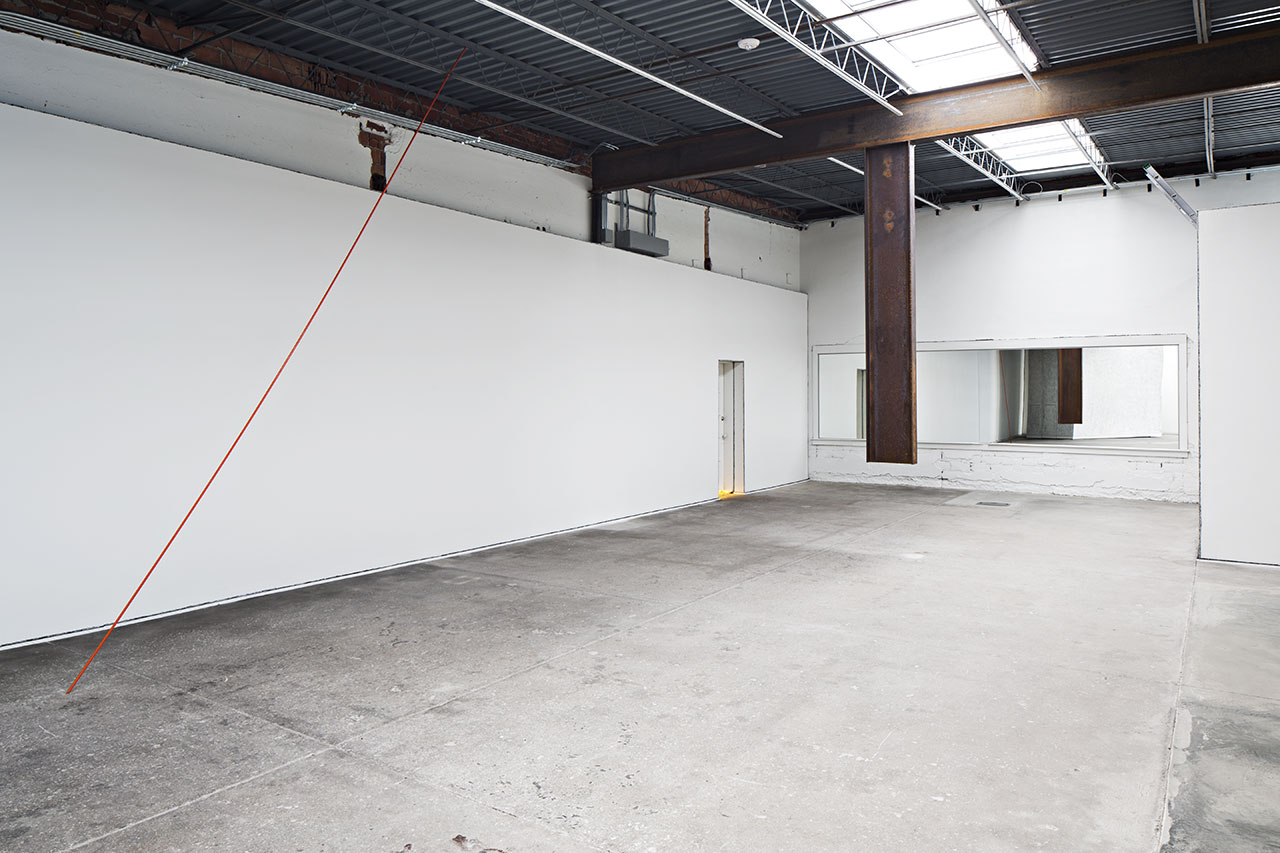 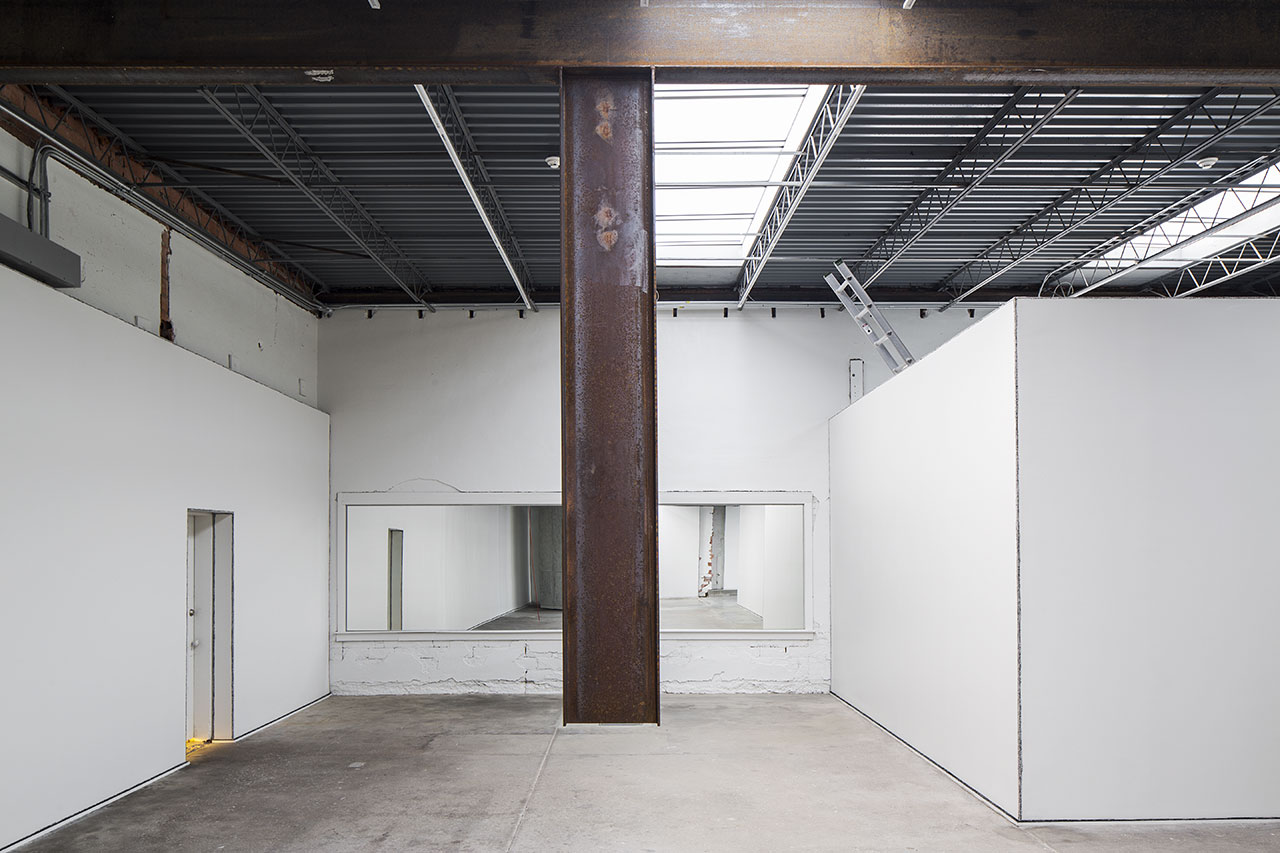 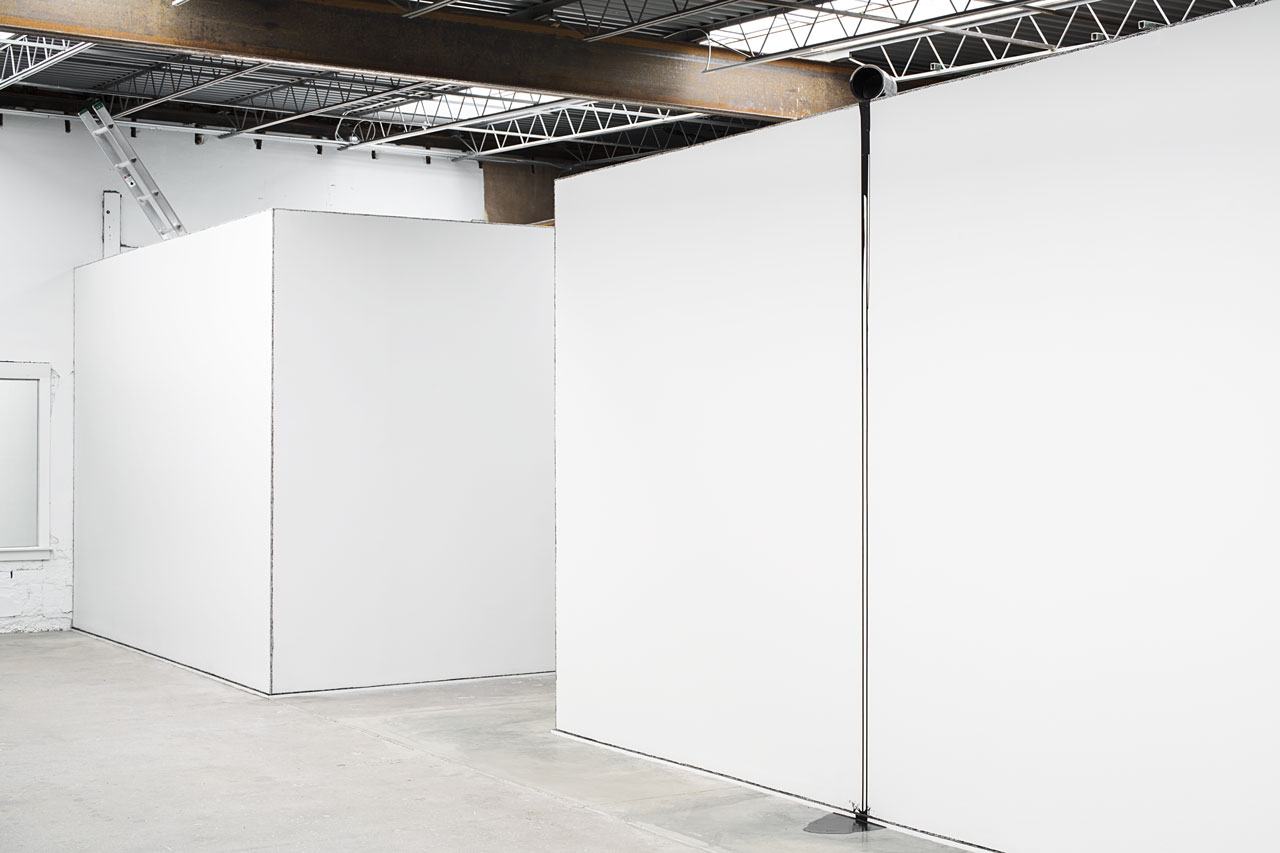 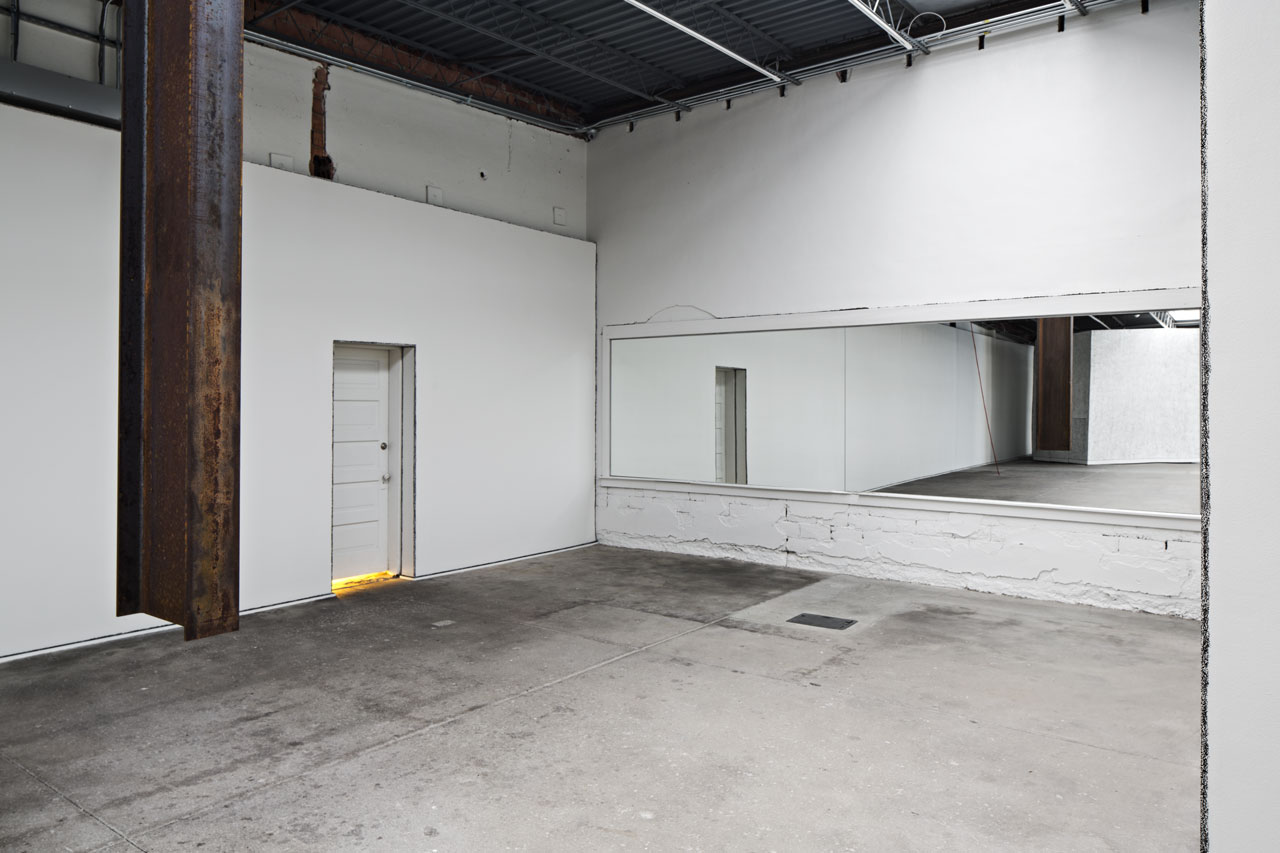 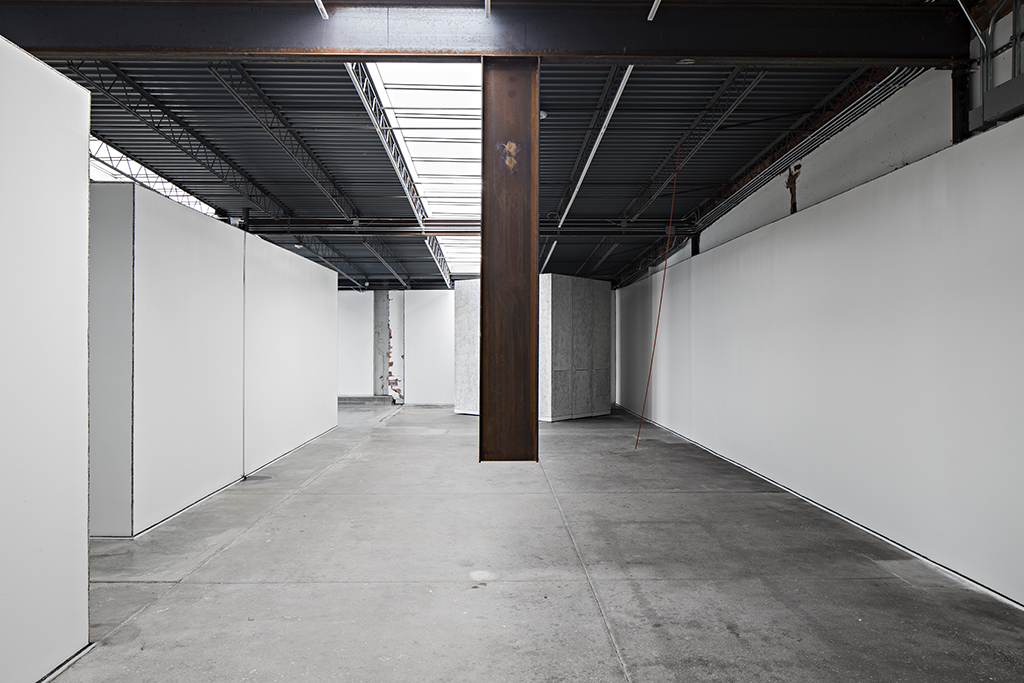 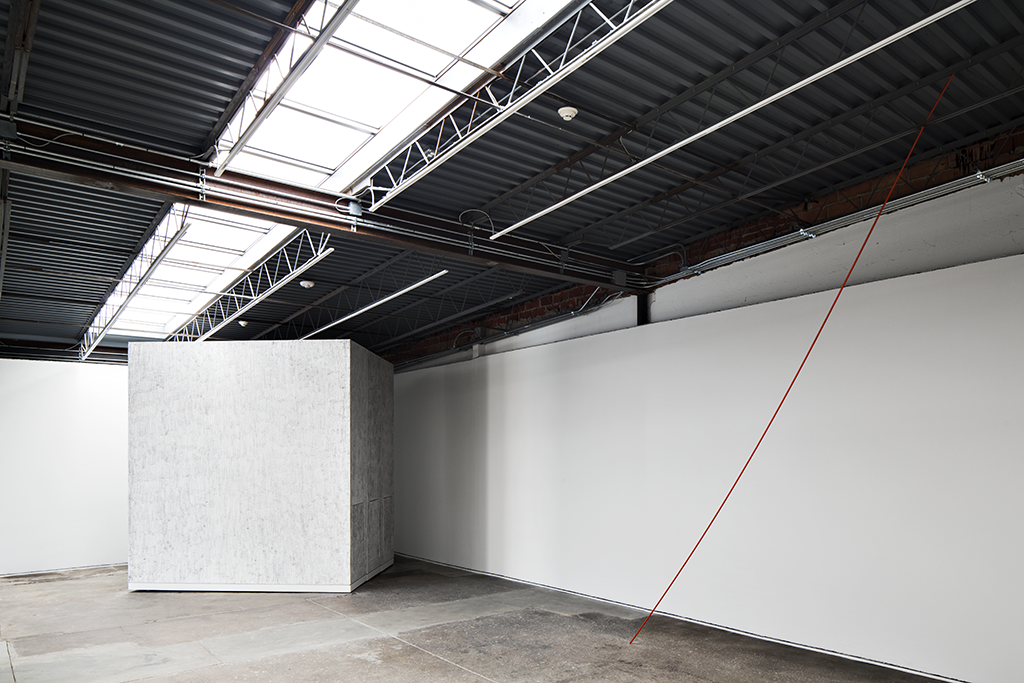 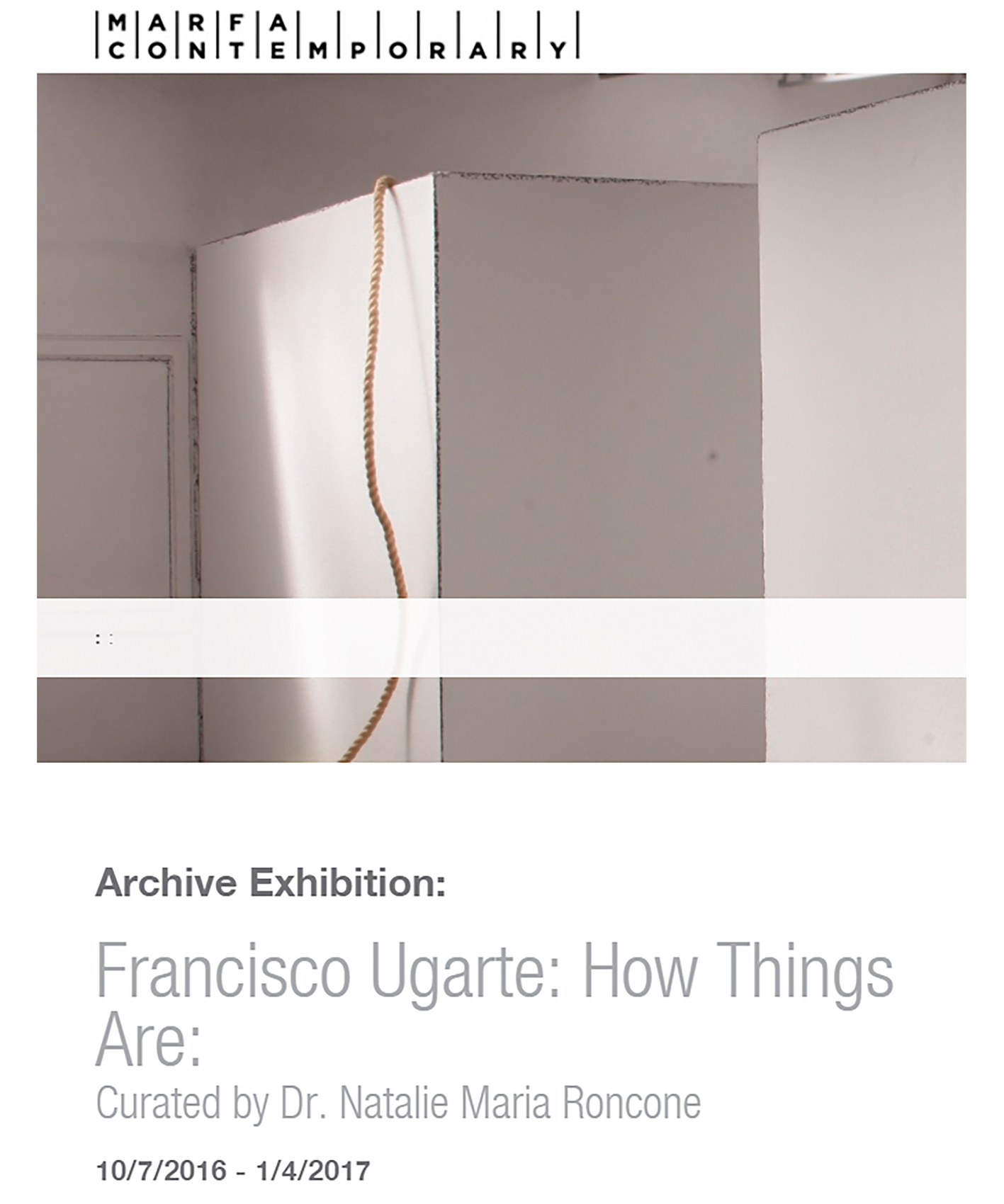 Exhibiton text-
Artist Francisco Ugarte presents the exhibition How Things Are as a space with an apocalyptic tendency. That doesn ́t mean it ́s catastrophic so much as entering the space he creates has become a kind of bodily exercise for the spectator, in which you are becoming part of something – like Geppetto being eaten by the whale. The idea of an area inside a gallery that physically slows down the process of viewing (metaphorically aligned with a cathedral) is something that the artist are becoming more aware of. Art, as Hal Foster once wrote, is becoming a kind of art, or design plus art, film plus art. What is the most astonishing today in terms of Ugarte ́s work is the idea of architecture plus art. It ́s like binary code, where art soaks everything. Art simply doesn ́t have its own cultural space anymore.

On entering the gallery, one is confronted with a cross-section of cement blocks that create an organic extension of elements already present in the architectural façade. The idea of the façade can be abstracted into the idea of front (still anthropomorphic, from the Latin frons, for forehead). Ugarte recovers the idea of frontality in his other abstract works (he creates a vast array of art in different media). However the intervention he has created here, in particular, evokes for me one of Le Corbusier ́s early masterpieces, The Villa Garche, which he presents a tremendous sense of frontality in a façade where the basic symmetry is challenged and made more compelling by asymmetrical events – something that Robert Venturi wrote about his contemporary treatise Complexity and Contradiction in Architecture. Another characteristic of the work relates to almost all of the elements in this exhibition: They have an architectural depth achieved by recessive frontal planes. They are layered, and this layering depends upon a highly legible distinction between front and sides to build up a powerful sensation of spatial depth.

The emphasis on frontal plane continues with the mirrored-glass interventions along the back wall, at the rear of the gallery, which form oblique longitudinal connections alongside which other layers of the architectural surround delineate the mirrors ‘depth. The spatiality this expounds introduces a time- based experience in exploring both its depth and the reflecting areas of the gallery. This is an essential characteristic of architecture, as it goes beyond the immediate sense of spectacle - the “looking at,” which we can photograph, to the “being in,” which we cannot. In Ugarte ́s work, this involvement starts as a virtual experience and evolves into the actual experience in the space. We are invited to enter imaginatively into the space in our interaction with carved-out sections of wall and strategically placed false walls, but we can ́t actually go into it. We might just about enter the void of the half-spheres partly concealed by the frontal planes that together comprise the great arcs of sculptural presence in the outside courtyard, but we do not. The interventions are something outside which we are. Not only have the works no use, we don ́t touch, they stand removed in the territory of art; their interiors are prohibited. Here we seem to have a definition if the difference between architecture and art, or do we? The experience of architecture lies in a duality between its perception as a visual art, which privileges its symbolic status, and its obligations to the physical world of construction and usefulness. The paradox is that the aesthetics of architecture reside, to some extent, in the disciplines if construction and the experience of its use.

In relation to the conventions of sculpture, Ugarte ́s use of industrial steel remains wholly innovative and surprising, but less so in relation to the evolution of the steel frame in 19th century architecture and its declaration of structural intent in the 20th century. The components of Ugarte ́s interventions here might have come from a construction site, but his intention diverges entirely from that of high tech, which is to normalize the aesthetics of construction. The sculptor defies and contrast constructional expectation with improbable playfulness in which sometimes very heavy steel elements are made to perform balletic tricks and confront the viewer, blocking their passage: For example, the steel beam that protrudes into the space of the viewer it’s suspended from its architectural counterpart above. It confronts you in its frontality and crucified state as some religious icon in a work by Cimabue. In this sense, Ugarte ́s work anticipates the deconstruction of architecture. In architecture aesthetics experience is bound up with use. It is practical rather than fine art in an Aristotelian sense and has to refer to something other than itself. This is a contradiction of Clement Greenberg ́s perception of architecture in 1950s.

In truth, the difference between sculpture and architecture is usually thought to be one of context and motivations; the artist is unconstrained and free, the architect constrained by function. But Ugarte defies such mundane principles. His interventions seem to me to be technically and spatially very exciting in the disciplines they impose. In Ugarte ́s utilization of architecture plus art, the architecture is trajectory of a spatial idea kick-started by an interpretation of function. Nothing is as it seems and constraints are translated into opportunity through creativity. His are not autonomous objects or subjects...no. Rather, the subject (gallery) is understood as a type of image, and that image is defined as a kind of subject ́s desires of its own. Ugarte respond to that subject ́s desires in ways that enhance and expand the trajectory of the architecture and, ergo, our understanding and relationship to the space as we journey through its elements.